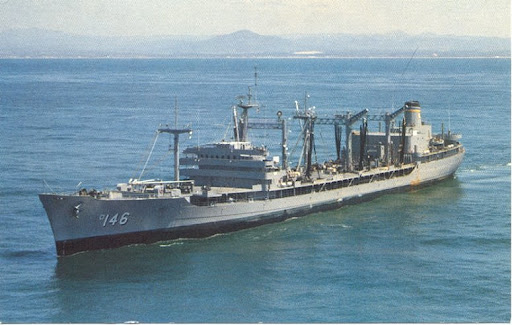 It was named after a well-known river in Minnesota:

If you were curious about how the USS Kawishiwi got its name, it was named after the Kawishiwi River in Minnesota.

It served as an oiler:

From 1954 to 1973 the USS Kawishiwi served as an oiler that transported much-needed oil to US Navy ships that were based in the Pacific and Asia. Some of the locations that the USS Kawishiwi frequented included the Hawaiian Islands and Vietnam. Oilers were and are a crucial part of the US Navy as they are responsible for transporting oil to all of the country’s naval ships which are based around the world.

Her home port was Pearl Harbor:

Her home port was Pearl Harbor which was located on the most populous of the Hawaiian Islands, Oahu. Although for a lot of her life she ended up being based in Vietnam. For example, in 1966 she spent half the year refueling US ships in Vietnam’s waters before heading back to her home base in Hawaii.

From 1970-1971, which was towards the end of her active military service, the USS Kawishiwi was commissioned to deliver mail as well as oil. During this time period, she delivered 250,000 of mail throughout Vietnam.

She continued her services with a civilian crew between 1978 and 1992:

When she was struck from the Navy’s list of active ships in 1992, the USS Kawishiwi continued her services but with an all civilian crew. She was eventually retired from this duty in 1992.

She was eventually scrapped:

The USS Kawishiwi was scrapped at Brownsville, Texas in April 2014. However, initially, the plan was to sink the USS Kawishiwi so that she could create a natural reef that could be explored by keen divers. The plan at the time was to create a natural reef off the coast of California. However, this plan was seen as too costly and she was eventually scrapped for parts.

The crew members of the USS Kawishiwi ao hold frequent reunions. As an example, in 2015 the ship’s former crew mates took a tour of Angel Island, in San Fransisco together. If you served on the USS Kawishiwi, you can find out about future reunions through the official Facebook page. Which is kept up to date.

In conclusion, if you were searching for information about the USS Kawishiwi, hopefully, you discovered a few fascinating facts. Especially if you have a great interest in military history or naval history.